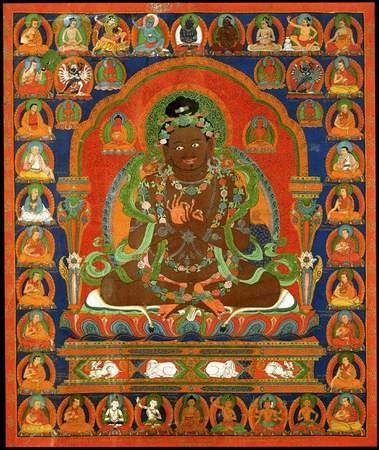 A la la, from the innate, free from proliferation,
this one, very brilliant, gloriously blazing beyond imagining,
he who is called Jetsun Virupa,
has become our Lord, e ma ho!

Freed from all concepts by your brilliance,
having increased the four joys with the airs of the three doors,
also chaotic activities has transformed into bliss and emptiness,
then having awakened, I shall offer a brief praise in commemoration.

The lord who has joined together the two benefits of happiness, excellence and perfection,
having shown the supreme path to fortunate disciples,
with wisdom and love, placing them in nirvana
I prostrate to the one at play in the supreme unmoving state.

Someone in this world from a royal family,
a monk who completed the five sciences,
the spiritual guide of millions of members of the order of his Sangha
I prostrate with devotion to the one famed as Elder Dharmapala.

Never defeated by opponents, the lord of the teaching
of the shastras of the great founders that have the meaning of the three trainings,
pillar of the doctrine, the second Omniscient One,
I prostrate to the one beyond dispute in the world.

During the day, a great assembly
was satisfied with the nectar of the teachings of the stages of the path,
in the evening, liberated by practicing secret conduct,
I bow to the one who realized the sixth bhumi by following Nairatma.

In order to guide living beings through unconventional conduct,
leaving the monastic sangha, with vulgar conduct
wandering through all the towns and roads,
I prostrate to the one famed to all as Virupa.

Reversing the Ganges and taming a wicked King,
after halting the sun, drinking the kingdoms wine
without getting drunk, splitting a linga, taming witches,
I prostrate to the Powerful Lord.

As such, at the end of demonstrating his limitless abilities,
having tamed Kartika in Saurasrta,
I prostrate to the one who at play in the great bliss of union
pervading the whole expanse of space with objectless great compassion.

Having shown the profound path with the four oral transmissions,
the method of quickly realizing phenomena as the reality of
the utter purity of bliss and emptiness,
I prostrate to the one who ripens and liberates the fortunate.

E ma, while my mind has not attained the stage of liberation,
in the utterly pure expanse,
in your presence, Jetsun,
please embrace me like this again and again.

As such, having increased the stream of nectar
of that which is produced as a byproduct of
your compassion,
I supplicate you to accomplish my goals.

Also, whoever follows your example
should never part from the two stages,
may there be no obstacles on the path,
please benefit the doctrine.

The airs of the pure three doors
increase the four joys;
after the four movements dissolve into the central channel,
may one obtain the stage of powerful vajra holder.

Also the fame of this residence,
pervades the earth [sa] and sky;
white [skya] like the moon or jasmine,
glorious virtue is to be enjoyed.

Lord Virupa himself, with the white earth behind him, covering the area in between Bal Ravine and Mon Ravine, was seated crossed legged, with the mudra of teaching. On his right was Krisnapa, on his left was Gayadhara, behind him was Kokkalipa and in front was Vinasa, were seen as being actually present.

When He bestowed the blessing of the four empowerments; explained The Concealed Path, gave the empowerment of Vajravidarana; gave the reading transmission for 72 divisions of tantra; The Intimate Instruction of the Path With the Result, Ten Great Accomplishments along with the Eight Subtle Ones, the words of the praise arose from the strength of Sachens experience.

Translated by Acharya Lama Migmar Tseten and Loppon Kunga Namdrol, as an offering on the Anniversary of the Lord of Yogins, the Mahasiddha Virupa. June 21, 2006